This online training course covers DSE – the Display Screen Equipment Regulations 1992 and shows users how to carry out a display screen equipment assessment by setting up a workstation correctly to avoid musculoskeletal complaints.

Course duration: Between 1 and 1 ½ hrs depending on learning speed.

Course format: Three video training modules, with a multiple-choice section at the end of each module.

On completion your training certificate is valid for three years, and is recognised by local authorities and corporate employers throughout the UK.

All training certificates are entered on the national training database and can be verified by employers or others to prove that they are genuine, by clicking Validate a Certificate and typing in the certificate number.

The DSE regulations apply to people who use DSE on a regular or daily basis for durations of an hour or more in a single session, and don’t apply to occasional users, such as delivery drivers who need to use DSE for customer signatures. Additionally, DSE isn’t just about the display screen equipment, it also covers a person’s workstation set up to ensure correct posture and the avoidance of eye strain and musculoskeletal complaints. The elements and topics that this online DSE course is concerned about cover:

Is this online display screen equipment (DSE) course for you?

If you answer 'yes' to either of the above then this course is for you.

If you answer 'no' to either of the above then this course is for you.

Why choose this online DSE course?

Because it serves to combat musculoskeletal disorders, reduced concentration levels, headaches, eye fatigue and other symptoms that are often the result of using a poorly designed workstation.

To advise employees about ergonomically designed equipment and its importance.

Because it explains the importance of cognitive ergonomics which is concerned with mental processes, such as perception, memory and reasoning.

Because a DSE assessment instructs that organisational ergonomics are about how to make things work well for and within an organisation. Policies, teamwork, deadlines and productivity targets. Creating easy systems of work for an organisation as a whole and not the individual.

DSE training is more important for people that sit at a workstation for the majority of their working day. The term DSE is can be quite misleading as it’s not primarily the display screen that may cause long term health risks but the work station set up and the workers posture. Although eyestrain can be a symptom of staring at a computer screen, it’s usually neck, back, hand, arm and shoulder pain that are associated with computer workstations.

Using a workstation is not classified as a high-risk task. It’s probably one of the safest work environments a person can have. However, working in an environment where you have almost zero risks of being struck by a moving vehicle, falling from height or suffering another accident that is associated with high risk occupations doesn’t mean a person will stay injury free.

It's worth noting that most people who use workstations do so for the vast majority of their working lives, and this is where problems can fester. If a person has poor posture because they aren’t aware of how the spine and musculoskeletal system works, they are at a huge disadvantage. Put an elastic band on a lamb’s tail and it eventually drops off. Likewise, if a person has poor posture, eventually long-term health issues are likely to develop. When the DSE regulations were introduced in 1992, it wasn’t because computer users were being rushed to hospital in their thousands. Instead it was because DSE’s had replaced paper and become one of the most common pieces of work equipment.

With adequate training and the knowledge of how to set up a workstation correctly so that it poses no long-term threat to individual users, DSE work is classified as safe. This course is designed to give people that knowledge, help them carry out a DSE assessment and help them avoid long term musculoskeletal disorders.

For ease of use the training course is split into three modules with a Q&A multiple choice section at the end of each module.

The pass rate for each module is 85% and you have to pass each module to move onto the next.

If you don't pass a module first time, you are given as much access to the course material as you need in order to meet the required standard.

Once you have completed the course, you will have instant access to your training certificate which is recognised by Environmental Health Officers and local authorities. 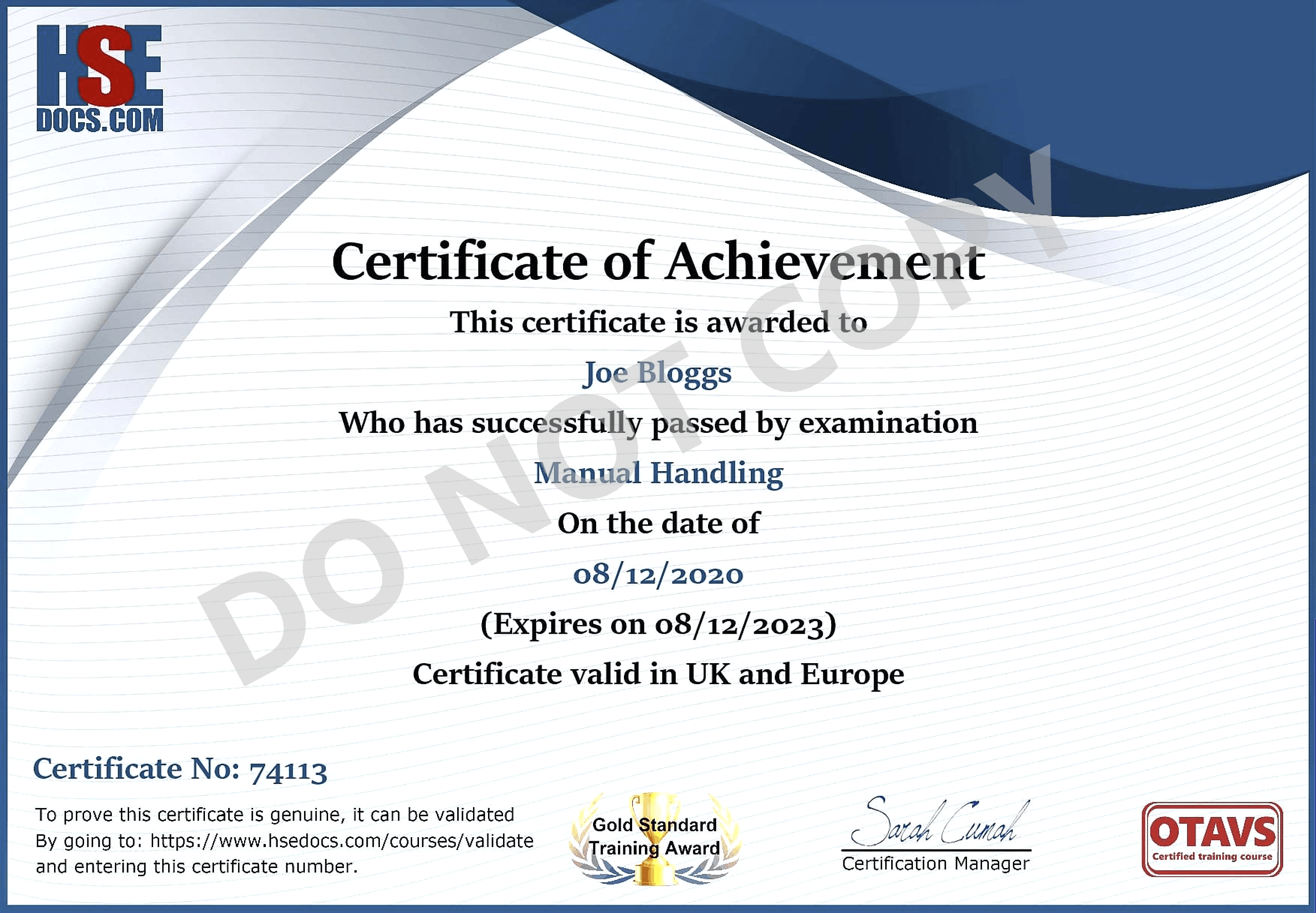 A sample of some customers we're proud to train